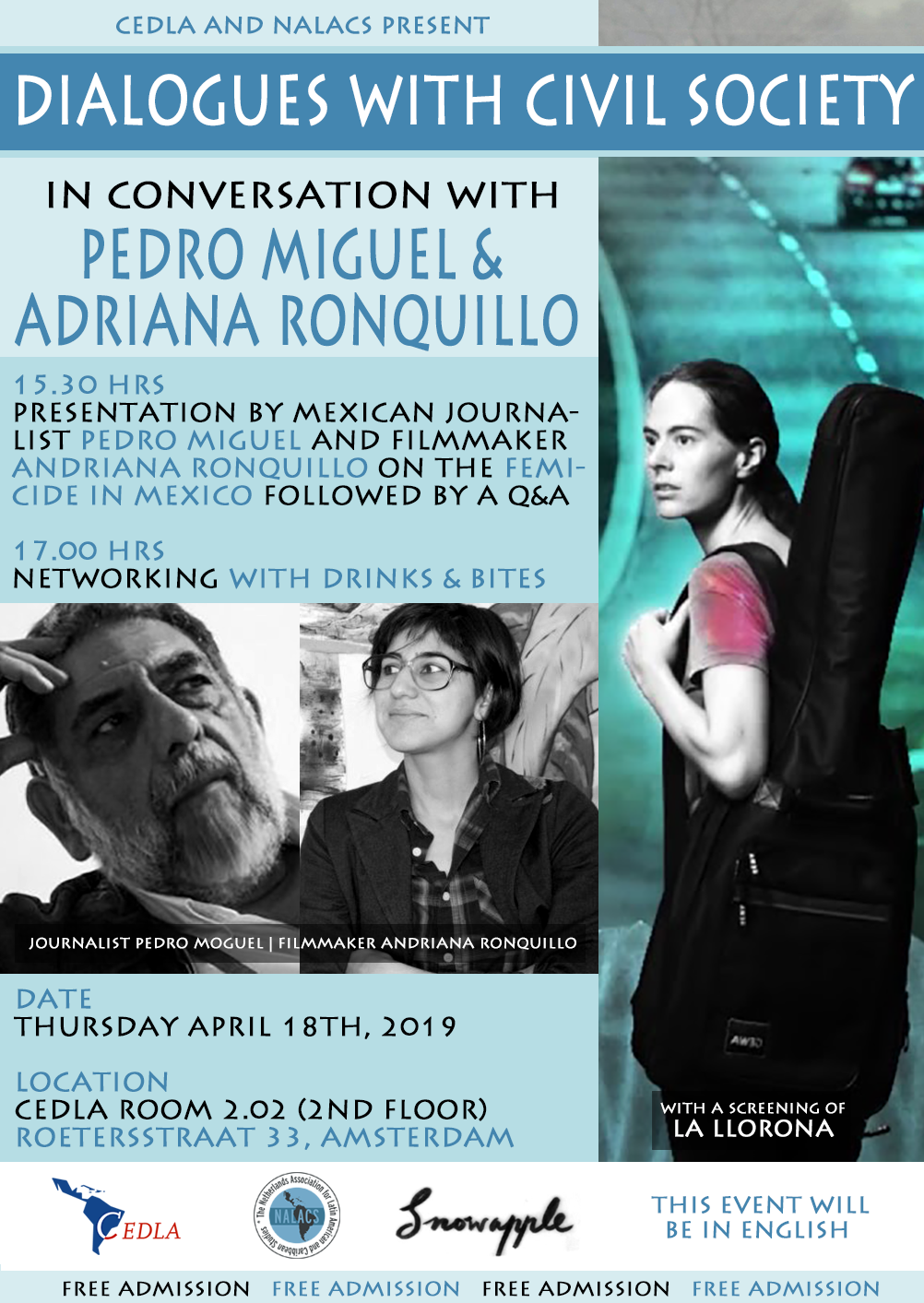 On Thursday, April 18th, 2019, Nalacs and CEDLA: Centre for Latin American Research and Documentation are organising the 8th edition of the ‘Dialogues with Civil Society’ series. This time we will focus on the femicide in Mexico together with Mexican Pedro Miguel and Mexican animator/filmmaker Adriana Ronquillo, who will also show his short animation film ‘La Llorona’ on the topic.

FEMICIDE IN MEXICO
Have you ever heard of femicide? This is the murder of women, because they are women. Femicide is a major social problem in Mexico, along with other forms of violence against women. Last year the Dutch/Mexican band Snowapple decided they had to do something. Since then, they have gathered a group of artists, researchers, teachers, mothers, activists, and journalists from the Netherlands and Mexico to join them on a mission raising support for change. In March, the band released the single ‘La Llorona’ (the weeping woman), an old Mexican Folk song with new lyrics on femicide written by the Mexican Journalist Pedro Miguel (La Jornada) who is currently working together with the new president of Mexico, Andrés Manuel López Obrad on a strategy against the femicides. On April 18th you have the chance to listen to Pedro Miguel and watch the short animated video of ‘La Llorona’ by the filmmaker Adriana Ronquillo, followed by a dialogue with them! Snowapple has invited Pedro Miguel to Europe with the hope to increase the urgency on the political agenda of Mexico and to get political support from the European Union.

Adriana Ronquillo is a Mexican animator/filmmaker who was praised on Festival de Cannes in 2018, for her critical short movie ‘Ticho’. Her work received many recognitions, such as the ﬁrst prize at the Think Forward Film Festival in Venice, Italy; Ojo Latinoamericano award from Bolivia’s International Human Rights Festival; and the National University’s ﬁrst prize during the International Animation Day in Mexico.

Snowapple is a group of multi-instrumentalists/singers from Amsterdam and Mexico. Playing original songs which they describe themselves as pop/folk/opera/avant-garde-cumbia. The group is currently touring the US, Mexico and Europe and is working on their 4th studio album. Their music has been played multiple times on BBC Radio and they made several appearances on international TV.

LANGUAGE
The film will be in Spanish with English subtitles. The language of the seminar will be in English.

REGISTRATION
This event is free and open for all to join, no registration needed!