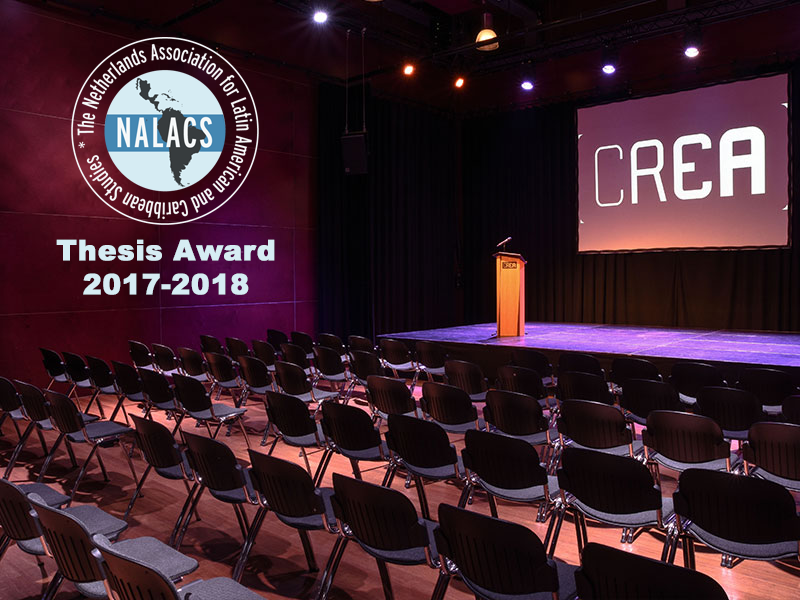 We are very pleased to invite you all to attend the Nalacs Thesis Award 2017-2018 on Thursday March 21 in CREA Amsterdam. Come and join the award ceremony for the best MA thesis written on Latin America and the Caribbean, including Pecha Kucha presentations of the nominated students. The event is free of charge and open for all to join!

INTRODUCTION (17.00 hrs)
Welcome in the Muziekzaal of CREA Amsterdam by Nalacs board member Rosanne Tromp.

SCREENING OF OUR SONG TO WAR (17.05 hrs)
Our Song to War (Nuestro Canto a la Guerra, 2018, 14 min) is the second short film made by Belgium-Colombian filmmaker Juanita Onzaga. The hybrid docufiction was nominated for the L’Oeil D’or at Cannes and screened at IDFA in Amsterdam. After the film, Adam Moore (RU) will provide a brief response.

In the Colombian village of Bojayá, in 2002, FARC guerrillas committed a massacre. In this poetic, visually stunning film, the town emerges as a mysterious place where people sing as they guide the spirits across a mystic river. This death ritual, Novenario, is to ensure that the angry spirits of the dead don’t return—a reconciliation between the world of the living and the lost souls that roamed the Colombian landscape during 50 years of war. The war may be over, but the past is never far away. Bullets and fear used to fill the night. Years later, a boy tells his friends stories about the skulls left lying around, about the ghost that visited him at his home, and about crocodile men. The beautiful camerawork in Our Song to War offers a glimpse into the collective subconscious. Something terrible happened here that still affects the lives of everyone today, but now the villagers are seeking a new balance. It’s time to transform the memories of war into magic realist stories.

“Exploring the territory of the village of Bojaya serves as the basis of the Colombian-Belgian filmmaker Juanita Onzaga’s narrative in Our Song to War– the perception of a reality permeated by the irrational, the persistence of archaic patterns, the survival of the sacred, all tied together by an exceptional sense of imagery.” Clermont-Ferrand Short Filmfestival editorial

1. Kafui Adjogatse with his thesis ‘“Por el Color”: Primary School Teaching and the (Re)production of Anti-Black Imaginaries of Mexican National Identity’ (University of Amsterdam / Universiteit van Amsterdam, UvA)
2. Catalina Andrea Gaete Salgado with her thesis ‘Nothing to celebrate: Comparative framing analysis on the commemoration of “the discovery of America” in Spain, Argentina, and the United States’ (UvA)
3. Juan Gutierrez Beltran with his thesis ‘Regeneration through Mobilization: Towards a cohesive and responsive strategic urban regeneration for Bogotá’s Historic Center’ (TU Delft)
4. Mirtha Lorena del Castillo with her thesis ‘Seeking for spatial justice: Strategies, social effects, and citizen responses of Barranco’s urban renewal process’ (CEDLA: Centre for Latin American Research and Documentation)
5. Alexine van Olst with her thesis ‘”Here in the South, we do not like Carnival”: Subnational Identity as a Political Strategy in Southern Brazil’ (CEDLA)
6. Lieke Prins with her thesis ‘Girls to the front: Unravelling and creating socially and politically driven graffiti. An anthropological narrative’ (CEDLA)
7. Luis Reyes Escate with his thesis ‘Is there any water to come? An ethnographic theorization on Subtanjalla’s smallholders political ecology of water scarcity, Ica-Peru’ (CEDLA)
8. Andrea Torrens with her thesis ‘The path from mobilization to reintegration of FARC ex-guerrilleras Colombia’ (UvA)

FREE ADMISSION
This event is free of charge and open for all to join!