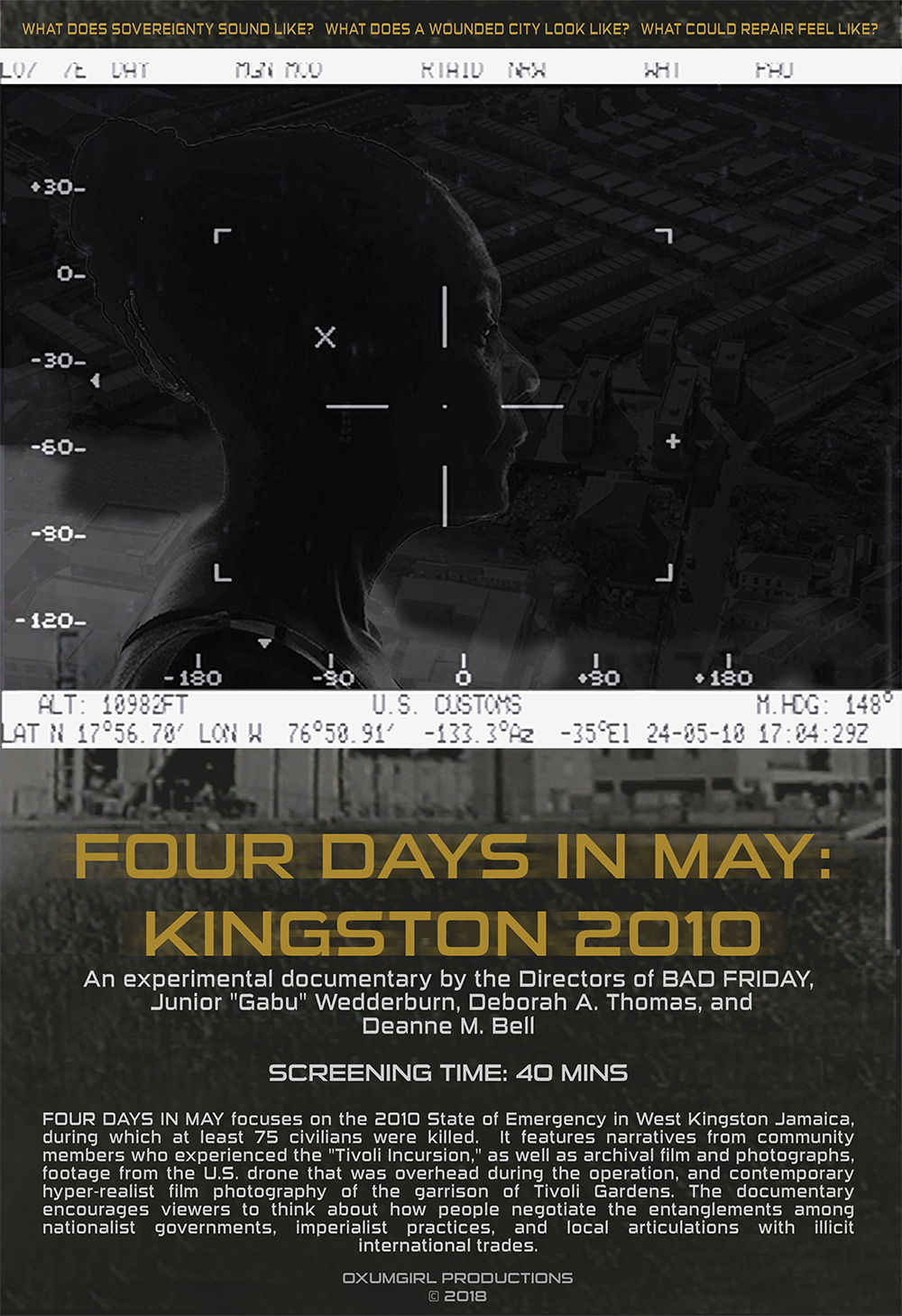 On Friday November 9 at 7 pm we host a special edition of Reggae Vibrations Film at De Balie. This is the Dutch premiere of Four Days in May: Kingston 2010 in the presence of director / producer Deborah A. Thomas, followed by a discussion with Deborah A. Thomas and Jamaican criminologist Anthony Harriott. The discussion about (the representation of) state violence in Jamaica will be introduced and moderated by Rivke Jaffe.

Language:      English (both the film and the roundtable discussion)

Four Days in May: Kingston 2010 is an experimental documentary about the State of Emergency declared in West Kingston in 2010, when Jamaican police and military forces took violent action to arrest and charge Christopher ‘Dudus’ Coke, a local ‘don’ and international drug trafficker, whose extradition was requested by the United States. The ‘Tivoli Incursion’, as the operation is called in Jamaica, eventually resulted in the death of 69 civilians in Tivoli Gardens, the low-income neighborhood that served as a power base for Dudus. In this film, residents of the neighborhood talk about their experiences during the operation and share memories of the loved ones they lost at the time. The emotional testimonies are combined with archival images (both videos and photos), images of the American drone that made recordings during the operation, and hyper-realistic contemporary images of Tivoli Gardens. The viewer is thus encouraged to think about how ordinary people deal with international smuggling practices and how they are involved with national governments, colonial forces and local practices.

After the film, director/producer Deborah A. Thomas will converse with criminologist Anthony Harriott (University of the West Indies) and the audience about (the representation of) state violence in Jamaica. The debate will be moderated by Rivke Jaffe.

Deborah Thomas is Professor of Anthropology at the University of Pennsylvania. Her research focuses primarily on the aftermath of imperialism and the impact of (political) violence in Jamaica. In addition, she is the co-director and co-producer of Bad Friday: Rastafari after Coral Gardens (2011), a documentary about Jamaica’s history of violence through the eyes of the Rasta community, and now of Four Days in May (2018).

Rivke Jaffe is Professor of Cities, Politics and Culture at the University of Amsterdam. She she mainly conducts research on the intersection of urban and political issues in Caribbean societies.

The screening is organized by De Balie in collaboration with NALACS, the Netherlands Association for Latin American and Caribbean Studies, Caribbean Creativity, a non-profit foundation committed to the promotion of Caribbean and Caribbean-themed cinema, and Reggae Vibrations, a bimonthly reggae event in the city of Amsterdam. Usually an edition of Reggae Vibratrions Film in De Balie is organized when there is a reggae party in Paradiso Amsterdam, but due to the availability of the director and other guests, we have this time chosen for a stand-alone film edition on Friday November 9. Reggae Vibrations again takes place two weeks later in Paradiso Amsterdam, on Friday November 23, this time without film but with (early) concert of Meta and The Cornerstones! Click here for more info & RSVP.