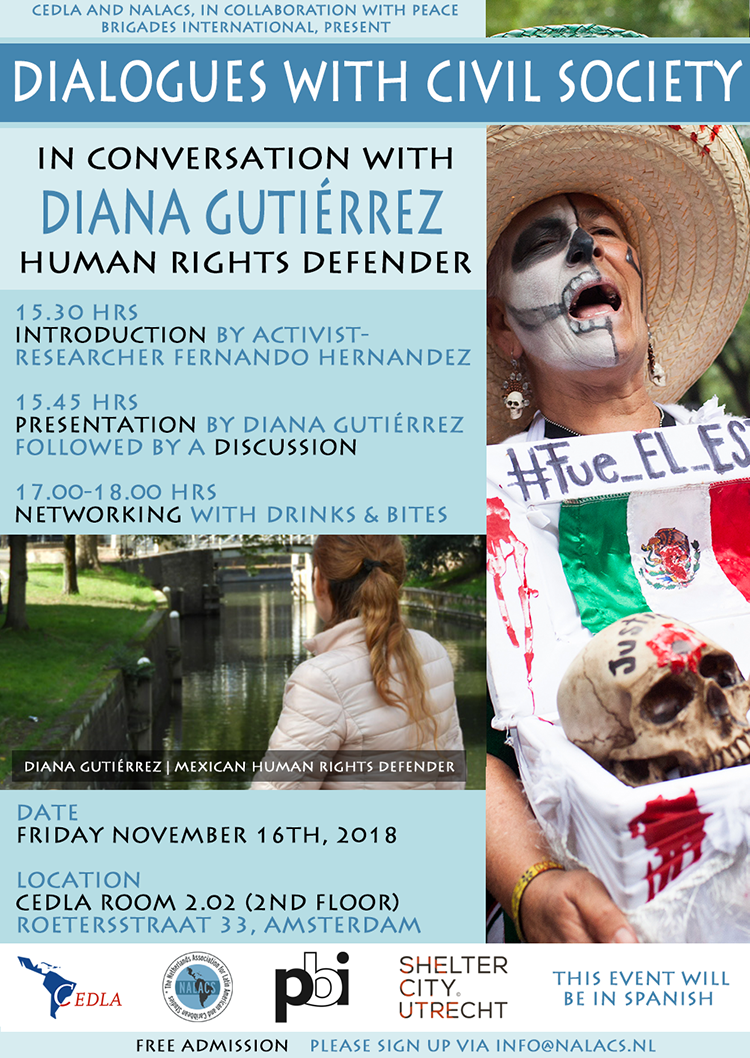 On Friday, November 16th, 2018, Nalacs and CEDLA: Centre for Latin American Research and Documentation are organising the 5th edition of the ‘Dialogues with Civil Society’ series.

This time we will receive Mexican human rights defender Diana Gutiérrez, with an introduction by Mexican activist-researcher Fernando Hernandez. The session will be moderated by Rosanne Tromp.

ABOUT DIANA GUTIÉRREZ
Diana Gutiérrez is a human rights defender from Mexico who focuses on the issue of disappearances. In 2017 she co-founded a collective. This organisation works alongside civil organisations and families to help track their missing loved ones. This can involve searching media dissemination (press, internet television), extensive research, checking hospitals, asylums and shelters while coordinating with the Institute of Forensic Sciences (Incifo) and Forensic Medical Service (Semefo). Searches can require travelling to different provinces in Mexico and the organisation frequently becomes a family’s first point of contact in the event of a disappearance, as police responses are notoriously slow. In addition the organisation provides workshops, seminars and conferences to help educate the public and has also contributed to the alternative report to the Committee against Forced Disappearances (CED) of the United Nations. During her stay at Peace Brigades International – The Netherlands, Diana hopes to acquire new tools and knowledge applicable to her pursuit of strengthening human rights in Mexico. Furthermore she wishes to expand her contact networks so she may be exposed to new ideas, projects and perspectives.

LANGUAGE
The event will be in Spanish.

REGISTRATION
Admission is free. Please do confirm your attendance with an e-mail to NALACS Board member Emiel Martens at [email protected].